The EUR/GBP has become bullish in the first week of December, and it has only climbed up since then. The trend was steeper in the first week, but it has slowed its pace in the last three weeks. That said, this pair has formed a channel which it has vigorously respected at this time. 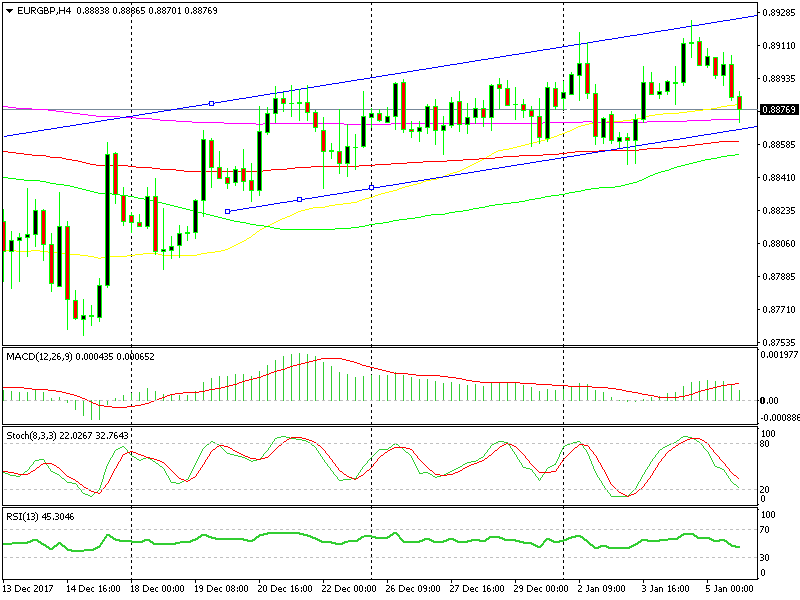 Three technical indicators are pointing up on this chart, can you spot them?

As can be seen on the H4 chart above, the uptrend has been slow but steady, and the moving averages have been lending a hand to the buyers as well. They have become a support as the price moved above them.

Apart from moving averages and the upward channel, the stochastic indicator has also played its part in this uptrend. The price has become higher every time stochastic approached the oversold area.

Now that the stochastic indicator is oversold, the price is at the bottom of the channel, and the 100 SMA (red) is providing support. We just opened a position here, as can be seen on the signals page. With high hopes, we will get some action today before the markets close for the weekend.

Check out our free forex signals
Follow the top economic events on FX Leaders economic calendar
Trade better, discover more Forex Trading Strategies
Related Articles
Selling EUR/GBP Below the 20 SMA, Ahead of the BOE Meeting
EUR/GBP has been quite bearish recently, as the BOE has already has hiked interest rates many time and we decided to sell this pair again
1 week ago