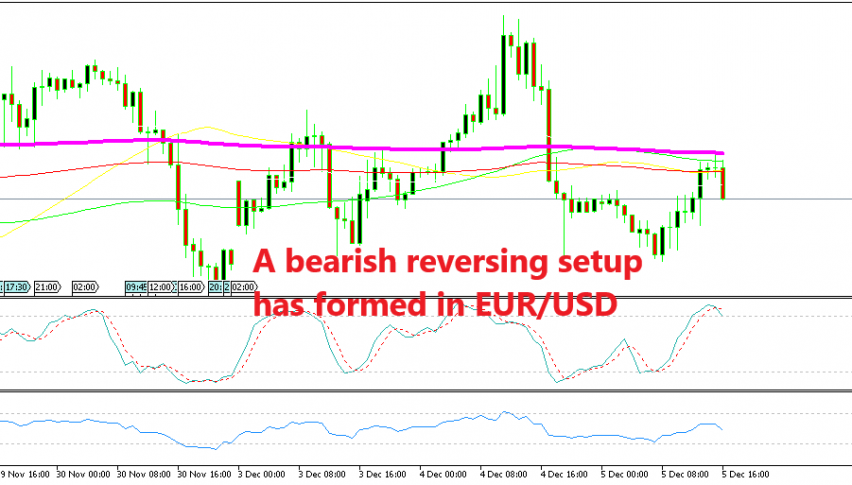 We opened a sell forex signal in EUR/USD a while ago today. The better services report from the Eurozone, the jump in GBP as well as some USD weakness during the European session have contributed to push this pair higher today.

But, the trend in EUR/USD is still bearish, especially after the bearish reversal and the 100 pip decline yesterday. So, today’s bullish move in the European session looks more like a retrace of the main bearish trend. This looked like a great opportunity to go short, right?

The stochastic indicator is overbought, which means that the retrace higher is complete and the bullish move is exhausted. The 200 SMA (purple) also provided great resistance, helped by the other moving averages as they conflate around 1.1350-60 area.

Besides that, the last two candlesticks closed as dojis which are reversing signals, especially after a retrace. So, we decided to go short on EUR/USD and it seems to be the right decision since the bearish reversal is already underway. The current signal looks quite bearish and we are more than 10 pips in profit, so let’s let it roll.

Update: The price has reached the take profit target already as EUR/USD dived lower fom the 200 SMA. So, our forex signal closed in profit.

Booking Profit on Our AUD/USD Buy Signal, Following the US Employment Report
23 hours ago