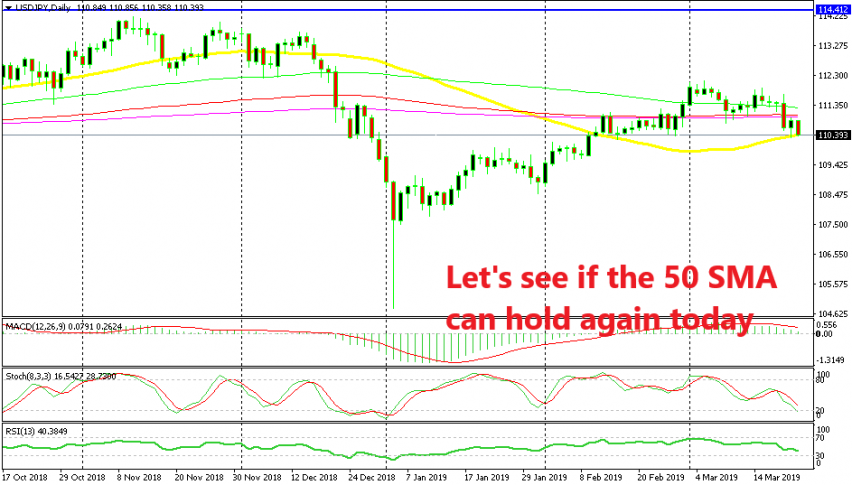 The sentiment has once again turned negative in financial market as major central banks turn dovish. The Reserve Bank of Australia was the first to turn dovish, followed by the Bank of Canada about three weeks ago. Two weeks ago, the European Central Bank turned dovish as well and the FED surprised us this Wednesday.

As a result, risk assets have turned bearish in recent days while safe havens have turned bullish. Today, the manufacturing PMI report from the Eurozone showed that this sector is heading for the abyss, especially in Germany, and that’s before Donald Trump slams tariffs on European car industry, which he is talking about just now.

USD/JPY has taken a hit and dived around 50 pips after the Eurozone data was released. But now the price is facing the 50 SMA (yellow) on the daily chart which stands at 110.35. The sellers had a go at this moving average yesterday but this pair found solid support at it and the price bounced around 70 pips higher off the 50 SMA.

This hasn’t exactly been the strongest indicator out there, but it has provided support in early January, so we might see another bounce now. But, I will not try to catch the falling knife as the sentiment has deteriorated considerably now and the safe havens are the way to go until things improve. If you want to go long from here, it’s your decision, but it is risky.