This week the US Dollar has been enjoying the good times as the bullish reversal which started last Thursday after the confirmation that the European manufacturing sector is in deep contraction and the impressive US retail sales that same day. The USD has been pretty bullish all week, making new highs against most major currencies. Although, in the last few sessions the price action has been really quiet as traders were awaiting the US GDP report which was released a while ago.

Stock markets have also been bullish in the last few weeks although yesterday and during the Asian session today, we saw a pullback. But the pullback ended today and they are resuming the bullish trend now. Not Bitcoin though; Bitcoin lost $500 early in the morning today and it finally broke the 200 SMA on the daily chart which turned into support this week after providing resistance during the previous few weeks. There was some news overnight which my Aussie colleague Rowan covered about the loss of a number of Bitcoin coins that were never recovered. That undermines the safety of digital currencies, so it is bad news for the new industry.

The US GDP report was released a while ago and at first glance, it looked quite impressive as the US economy grew by 3.2% in Q1 of this year against 2.2% expected. But, the details were mixed, with inventories and trade helping boost the GDP. These are temporary factors, likely to reverse in Q2, so the Buck went from bullish to bearish pretty quickly. Inflation was weaker as well, as the GDP Price Index showed, so no pressure for the FED to hike interest rates. 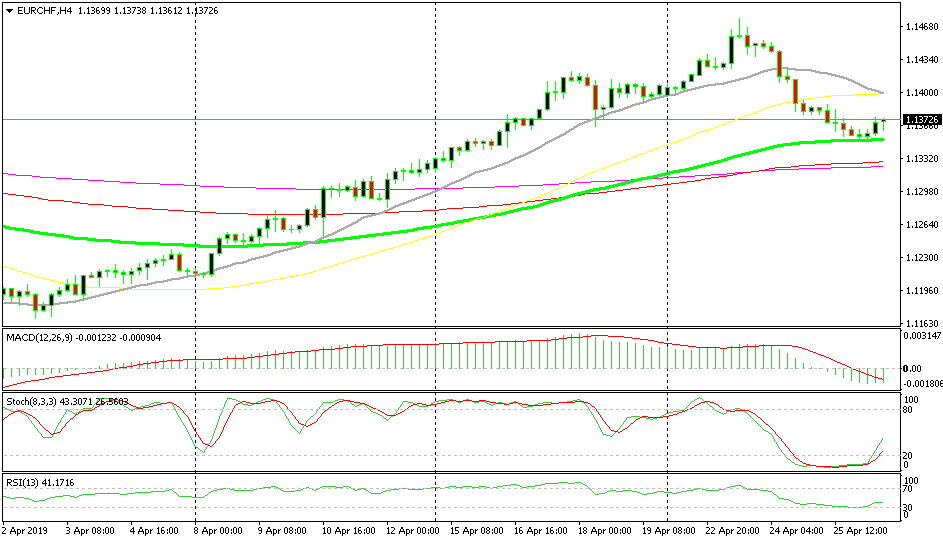 The 200 SMA has turned into support for Bitcoin now

EUR/CHF has been on a bullish trend all this month after the SNB threatened with intervention at the beginning of April. Since then, this pair has climbed more than 300 pips and the 20 SMA (grey) has been providing support during this time. But it was broken this week as EUR/CHF retraced lower and the retrace seems complete now. The price also found support at the 100 SMA (green) on the H4 time-frame chart and is bouncing higher off it.

The US GDP report that everyone was waiting for is now out and it was impressive as it showed a 3.2% expansion in the economy in Q1 this year. The USD jumped initially but the details weren’t too promising as the buildup in inventories and the increase in trade are temporary factors likely to turn lower in Q2 which would hurt the GDP in this quarter. So, the USD has turned slightly bearish now.

How Far down Is the Bear Market Taking Ethereum (ETH)?
8 hours ago