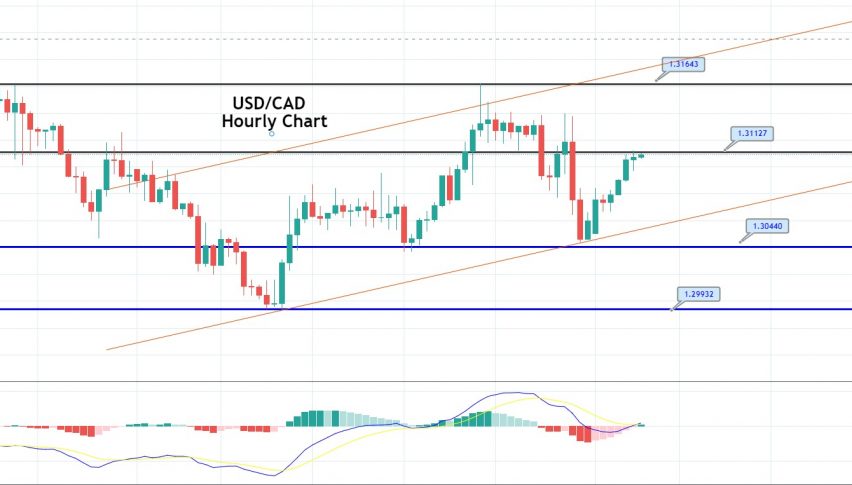 The USD/CAD pair closed at 1.30609, after placing a high of 1.31401 and a low of 1.30439. Overall, the movement of the USD/CAD pair remained bearish throughout the day. On Friday, the USD/CAD pair dropped, despite the strength of the US dollar, due to positive US jobs data and decreased crude oil prices. This is a result of the recently-emerged negative correlation between the US Dollar and the Canadian Dollar.

The West Texas Intermediate Crude Oil prices fell below the $ 40 level, weighing heavily on the commodity-linked Loonie. This should have raised the USD/CAD pair on Friday, but investors mostly ignored these factors, as the focus shifted towards the risk sentiment and declining Canadian equities.

On Friday, Canada’s main stock suffered its hardest fall in nearly three months, as a sell-off in high flying technology shares continued, lending strength to the Canadian Dollar. It was again supported by the domestic job data, which showed that the economy was on the road to recovery, even though it fell short of expectations.

The Toronto Stock Exchange’s S&P/TSX Composite Index fell by 1.8% on Friday, taking it towards its biggest decline since June 11. It was the second straight day with a sharp decrease in the TSX, and with other North American indices, which had been flying high since March, also taking a fall.

On Friday, the Employment Change from Canada, which was released at 17:30 GMT, showed that the Canadian government had created almost 245.8K jobs in August, against the expectations of 262.5K. Meanwhile, an increase in the Canadian Unemployment Rate was also reported for August, coming in at 10.2%, against the anticipated 10.1%.

The readings were close to expectations, but nevertheless fell short of them, so while they indicated growth, it was not as much as projected. However, investors mostly ignored the fact that the data fell short of expectations, focusing more on the fact that the economy was on the recovery track. As a result, the Canadian Dollar strengthened, causing a sudden decline in the prices of the USD/CAD pair.

From the US side, the US Non-Farm Employment Change in August was reported as 1371K, against the anticipated 1375K. Though the difference was not that dramatic, the fact that it did not meet the expectations caused investors to start selling the US dollar, and the USD/CAD pair fell. Moreover, the faded risk sentiment also added to the losses of the risk-sensitive USD/CAD pair, as a result of the increased tensions between the US and China and the rising number of coronavirus cases globally.

The USD/CAD is consolidating at the 1.3104 mark, with an upward movement, and trading beneath an immediate support region at the 1.3138 mark. The formation of candles beneath the 1.3138 level is anticipated to encourage the selling trend until the 1.3052 support level. Simultaneously, the bullish breakout at the 1.3138 level could promote the buying trend until levels of 1.3185 and 1.3245 today. Overall, the technical tools suggest a neutral bias, as the RSI is bouncing above and below 50, whereas the 50 EMA is likely to provide resistance at the 1.3105 mark. Good luck!