The first two weeks of last month were unbelievable and we saw extreme volatility, but the price action normalized in the last two weeks – so we thought that in March the market would be regular. But, the big central banks seem to have been forced into a coordinated move in the G20 meeting, based in China, that took place in February. The ECB shot all their guns at once while the FED turned bearish all of a sudden. The US Dollar was the victim on both occasions, losing nearly 600 pips against the Euro. Nevertheless, we had a good month making 517 pips… which came mainly from our long-term EUR/USD forex signals. 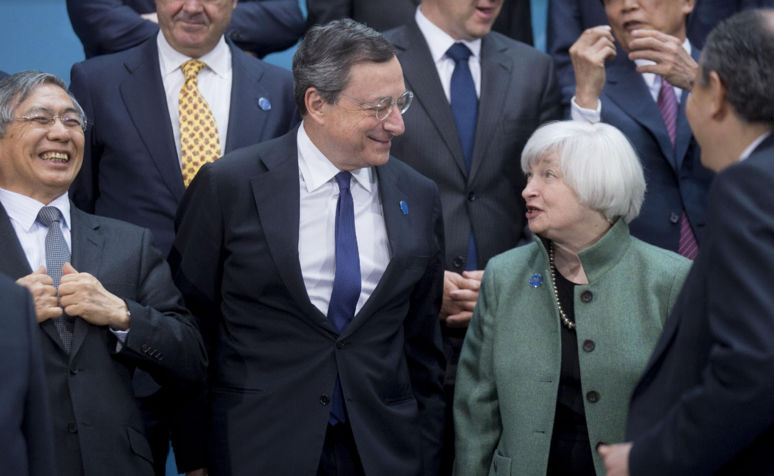 After having a great month in January with more than 800 pips profit, we had a setback in the first two weeks of February, when the forex market was in panic. Thus, we decided to tread lightly in March, and therefore the number of forex signals was pretty low. We only issued 71 forex signals this month, two of which still remain open. We had 48 winning fx signals and 23 losing fx signals, so the win/loss ratio for this month is 68:32. This is lower than our long-term average ratio but we had a pretty good month in terms of profit. 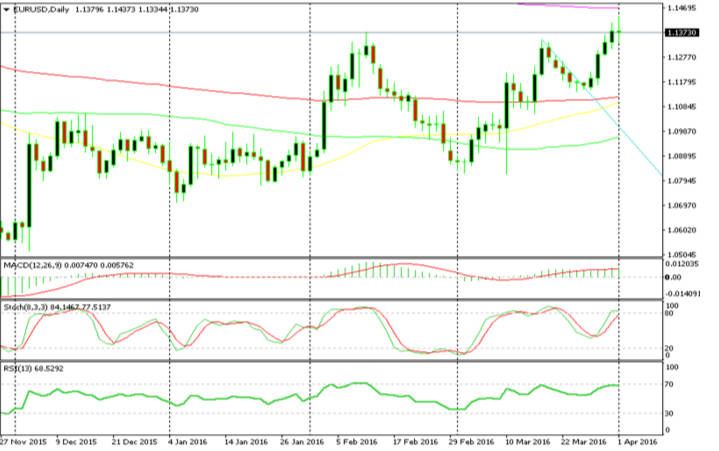 This month, we made 517 pips – even with the win/loss ratio lower than usual, and this means that we must have made most of our profit from the long-term FX signals which, in this case, is actually true. In the first three weeks, we had five long-term fx signals in EUR/USD which were closed manually for a total profit of 470 pips. The results were mixed in the first week but we managed to close it with a 60 pips profit. The second week was quite good and we made exactly 300 pips. The third week was followed suit, as we closed it with a 105 pip profit. On the fourth week, we made 90 pips but had to give back 112 of them in the fifth week of March, which brings our monthly total to 517 pips.

Here we are, spring season in full force and with a lively forex market to match. February was divided into two parts regarding the price action, a panicked first half and immense volatility, followed by a quiet second half with low volatility. We thought that the calm period would extend into March but the central banks had other plans. First came the ECB… the rhetoric of the members has been pretty bearish in the last couple of months and President Draghi had promised to take additional steps to fight the low inflation of the Eurozone and to help the economic growth. So, the market was expecting something big but never what actually happened. The ECB cut the repo rates to 0% from 0.05%, they cut the deposit rates from -0.20% to -0.30%, and they increased the monthly asset purchase from 60 billion Euros to 80 billion. On top of all this, they widened the asset range. They failed to impress the market last December so they made sure to meet and exceed the market expectations. The Euro tumbled 200 pips lower in the first few minutes after the release, but then it reversed and gained about 400 pips against the US Dollar which later turned into broad USD selling. The market took these steps as a positive sign for the Eurozone economy in the long run and that´s the reason for the Euro appreciation.

Then, it was the FED’s turn to take center stage. With the panic that we saw in the financial markets in February, no one expected the FED to hike the interest rates, although they promised 3-5 rate hikes this year. The FED left the rates unchanged indeed – but the FOMC statement was extremely dovish, which no one expected. The statement concentrated more on the global risks and global economic slowdown than the domestic economy, and this sent the US Dollar about 300 pips lower against most major currencies. But that was not all. A week later, the FED chairwoman Yellen appeared at a conference in New York. The market was expecting her to drop some of the comments from the FOMC statement, since we heard some hawkish remarks from a few FED members during that week. A couple of them even pushed for a rate hike in April! Well, she stood by the dovish FOMC statement and the poor Buck had another 300 pip decline. The PBOC also had cut the interest rates a few weeks ago and BOJ already eased further in late February, so this makes us think that the global central banks were forced to take coordinated monetary easing measures by the politicians last February.

The Japanese inflation and economic growth remained negative again this month. The final GDP came out a tick higher, but at -0.3% the economy is still in contraction. The inflation and personal spending doesn’t look good either, but at least the industrial production is picking up. In China, the industrial and manufacturing production is a little bit better off this month but it still remains below the breakeven level and the services sector is losing pace even further. The European services sector data posted a 0.3% increase but the manufacturing sector is still near contraction and the inflation fell further to -1.0%. The unemployment numbers dropped as well, from 10.4% to 10.3%. The UK final GDP revision for Q4 2015 came out 0.1% higher than the previous number but the industrial production figures showed a sharp decline. On the other hand, the manufacturing and the wages beat expectations by 0.5% and 0.2%, respectively. The US manufacturing sector has remained soft this month as well, but the employment sector remains quite strong – with both the unemployment claims and the employment change numbers positively beating the expectations. The US wages have increased as well, which has translated into a higher consumer confidence.

March has been a very good month for EUR/USD, because of both the Euro strength and US Dollar weakness. This pair made the most monthly gains in about five years. Right now, the price is around 1.1400-1.1450 level, near the 20 MA in the monthly chart, which is a strong resistance level as well. There´s still some more room for the stochastic and RSI to reach overbought levels, but the price needs to break above this resistance so the bulls can feel confident. On the weekly chart, the stochastic indicator is nearly overbought but the RSI is not. However, we won´t rule out further gains until the 100 MA that settles around 1.1720-30 which is the high from last August. Personally, I favor the bears at these levels and see the upside as very limited. 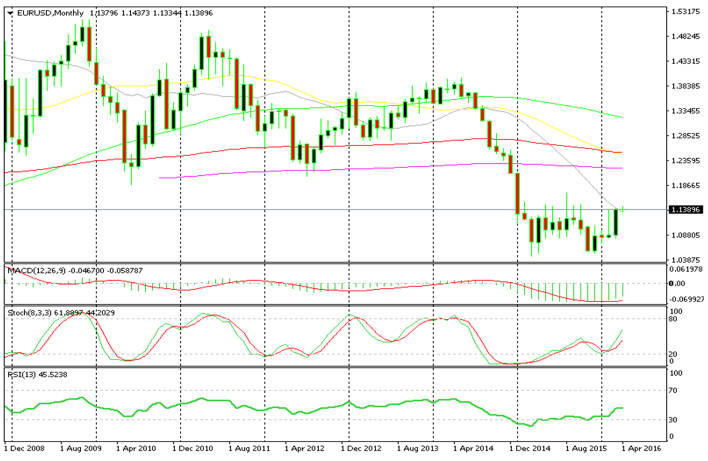 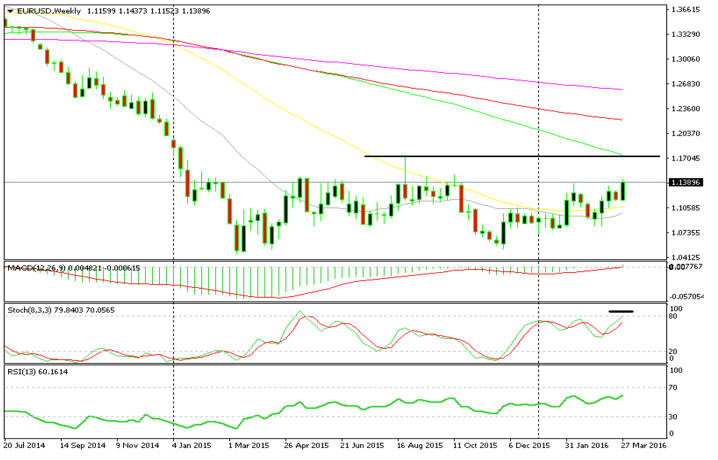 While this was the best month for the Euro against the USD, February was the best month for the Japanese Yen since 1998. This month, the price kept bouncing up and down between 114.50 and 111. It briefly broke below 111 level but the break was short-lived and the price reversed back up entering the 350 pip range once more. So, the monthly candle closed as a doji, which is a sign of trend reversal. The stochastic indicator on the monthly chart is also oversold which is another sign of a possible reversal. On the daily chart, we can see that the 111 level has been a strong support these last two months, while the 23.6 Fibo level has provided resistance. If a reverse is to materialize this fibo level will be clearly broken. 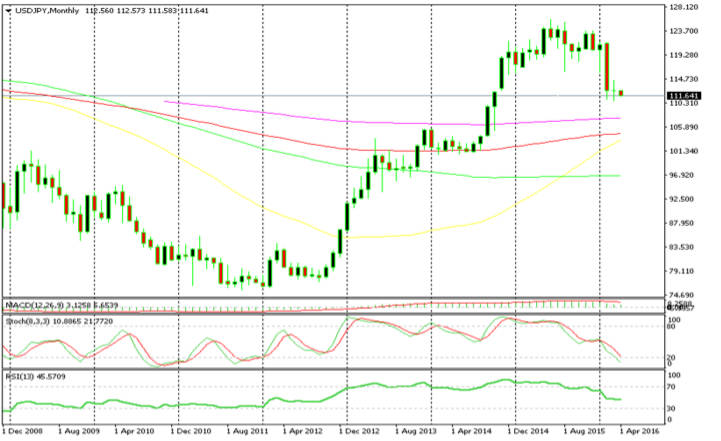 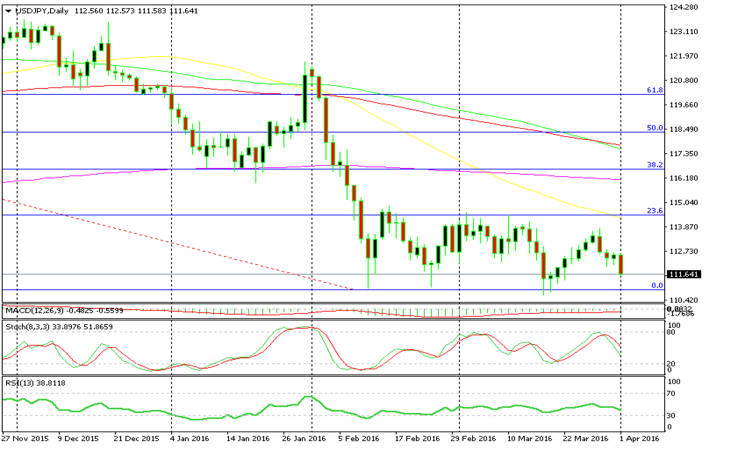 The trading range in the last six to seven weeks has been between 111 and the 23.6 fibo level

The month in conclusion

March was the month when the central banks took center stage. The ECB cut all possible rates and increased the QE program by a third while the FED turned suddenly dovish. Even the PBOC cut the interest rates. The US Dollar suffered a lot this month but we didn’t, as indicated by our profit. While Yellen has been the main dove of the FED, some members have made some hawkish comments and even mentioned an April rate hike, which is why the next FED meeting will probably be the most important event of the month. 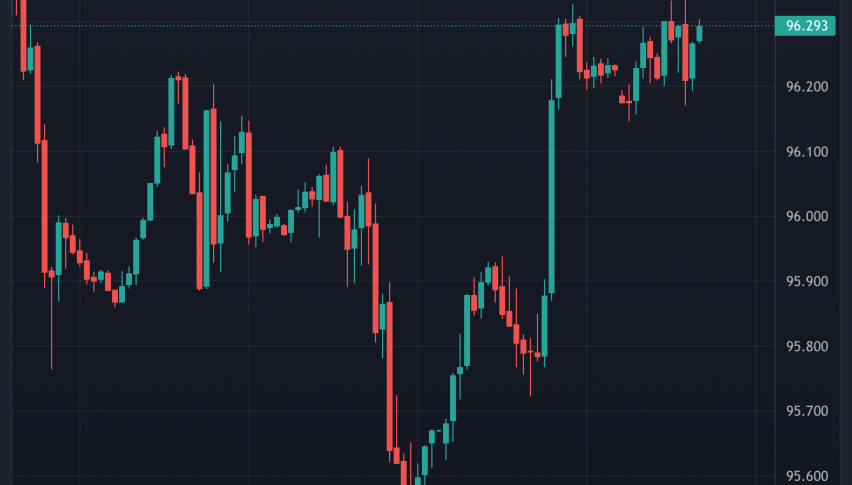